It is even easier now!

The focus was on the solution of simplifying complex design tasks during the upgrade to ATHENA 2016. Just a few working steps to the goal and to achieve this, existing functions were optimized and new ones added. 2D, 3D, dimensions, analyses, data interchange – lots of innovations to ensure that many tasks are completed more easily and more quickly. 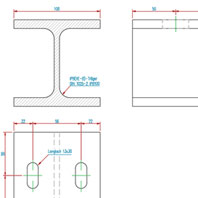 2D and 3D are merging more and more. For this reason 2D+ has been developed to draw quickly and efficiently in 2D, but nevertheless to still have the intelligence and analysis options of 3D: ATHENA 2D objects (bar-shaped standard parts, semi-finished products, infills such as panes of glass or panels) can now contain spatial information, e.g. a depth and processes. In this way they can be completely utilized, e.g. in parts lists and production drawings.

The following can be carried out on 2D profile projections:

The following can be carried out on 2D infills:

ATHENA users now have a new bidirectional interface available with which ATHENA, LogiKal and ERPlus can be linked in real time. The special feature here is that all three products access the same data version. A change in a facade element in one of the programs leads to an automatic update in the other two programs, irrespective of whether it is a change of profile, fields (e.g. Turn/Tilt to Turn), geometry or quantities. This saves an enormous amount of time and sources of error are eliminated.

Tables, which are output by ATHENA commands and are relevant to parts lists, are now available as intelligent AutoCAD tables. They can be edited quickly and simply using the AutoCAD functions so they can be formatted and exported and the output of intermediate results and the transfer to page 2 are possible. 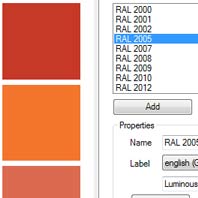 The new Surface manager facilitates the definition of surface properties for the use of bars and sheet metal. For example, colors and properties such as “anodized layer” can be assigned, or processes such as “ground” or “brushed”. In this way it is possible to assess how much surface area has to be coated.

The surface properties are assigned via the Bar assembly manager and the sheet-metal section function. Then they are displayed in sections and in the sheet processing/development. They also flow into the labeling and are output to the parts lists.

The new surface properties can also be used for a particularly realistic 3D visualization.

The functionality for the application of 3D infills has been expanded and optimized. Existing 3D infills can now be more easily interchanged and the edge spacer and the formation of the layers can be defined independently on each side of the panel.

ATHENA leaders can now be arranged retrospectively like the AutoCAD leaders with a uniform spacing to one another, either with a defined fixed distance or with a uniform distribution between two points.

The ATHENA commands “Objects invisible/visible” can be used in combination with the AutoCAD commands for hiding and isolating objects.

With this new command it is possible to slice several 3D bars in one working step. A slice plane is defined on a special layer either by specifying three points or via two points in a previously set view. The slice plane is not bound to slicing elements and can, for example, have a certain distance to a concrete edge. Profiles can be shortened or extended by moving the plane and the original state is restored by deleting the plane.

Different infill thicknesses of fields can now be obtained on a bar (e.g. mullions). The adjacent bar is then automatically interrupted.

When producing a 3D model, it is not necessary to consider different inset thicknesses beforehand. All bars are simply assigned the same inset thickness when determining the glazing bar assemblies if they are created using the functions “Apply bar assembly” or “Determine bar joint”. The bars then receive the final inset thickness during the subsequent insertion of infills using an automatic adaptation of sealing and equalization profiles.

The new possibility of multiple selection enables several outlines to be defined at once as processes, e.g. drilled holes, and assigned to infills. For example, complex perforated panels can be quickly created.

With this optional function NC data of ATHENA 3D profiles can be generated in the NC-W format. Together with all the geometrical information, such as cut-out parts and processes, the NC data also contains job and job-part information. An optional post-processor is required to be able to control profile processing machines.

The output module “Export SAT” is now available as an additional option for ATHENA to output 3D volume models in the ACIS format for machine control. 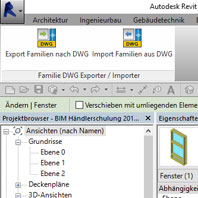 The Revit app “Family/DWG Exporter Importer” was developed to facilitate an easier and faster BIM data interchange between ATHENA and Revit. This enables Revit families including their parameters to be saved automatically as an AutoCAD drawing and they can then be edited with ATHENA. On the other hand, if the drawings modified with ATHENA are saved with index and the parameters updated, the drawings can be quickly and easily imported again in Revit. The corresponding families and their parameters are updated.

This means that a facade planner can export window, door or facade elements that are represented as “dummies” from an architect’s Revit model to ATHENA where they can be converted into technically correct and intelligent elements. They can then be imported back into the Revit model and the dummy elements are automatically substituted by the technically correct elements. Here, types are exchanged for the same type.

The app can be downloaded in the Autodesk App Store.

The standard parts and manufactured parts library has been revised and expanded as follows:

Interrupted dimension: Objects can now be located in different viewports.