Fast management, easy to find drawing objects, and simple and comfortable output of parts lists – that’s what the new Project Browser, the highlight of ATHENA 2018, is designed for. Enhanced with new time-saving features for construction and dimensioning, the result is a package for more professional work, both in 2D and in 3D. 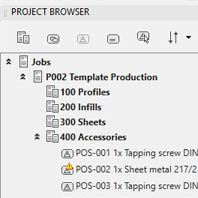 The new ATHENA Project Browser is a powerful tool for listing, sorting, managing and finding 2D and 3D drawing objects in drawings. All ATHENA objects, AutoCAD blocks, AutoCAD solids, and non-graphical objects can be used.

Objects can be taken from the drawing into the Project Browser by clicking or ticking, and can then be sorted into an order / partial order tree structure. The spatial information of 2D objects that were introduced with ATHENA 2D+, such as length and depth, is taken into account. 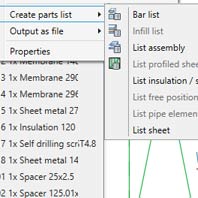 The Project Browser significantly simplifies the list output of the 2D drawing parts. When it comes to objects, it has often been necessary to create parts lists manually, such as in Excel. Now, the Project Browser allows for fast and effective generation of parts lists with the collected information, such as bars (profiles), glasses, assemblies, sheets, tubes or free positions. During the list output, the same parts can be recognized and grouped together.

To find specific parts quickly and easily, click on the list and they will be illuminated in the drawing.

A good example for the usage of the Project Browser is a 2D drawing detail, such as a horizontal wall junction. With just a few clicks, the Project Browser can handle and list all the required objects, such as profiles, insulation, foils, screws, dowels and small parts.

With the new upgrade, AutoCAD solids can now be imported into a project and exported in IFC format.

While designing in ATHENA, ERPlus users can now search for parts in the ERPlus parts database when selecting ATHENA parts (e.g. standard parts), and retrieve the part numbers. Thus, the database is syncronized and is always up-to-date both in ATHENA and ERPlus.

The new command “Welded seam section” creates an intelligent ATHENA object that can then be grip edited or edited by double-clicking.

The function “Arranging Viewports” has been enhanced by the possibility to arrange the display windows with different sizes, variable heights and widths. In addition, display windows can now be synchronized, such that moving the box of a display window automatically changes the content in the corresponding paper space.

The contours outputs with the “Grid division” module are now replaced by ATHENA filling objects, which can be used to generate glasses and panels with any number of layers. The generated objects are suitable for evaluating single-part drawings and lists, and can also be converted into 3D objects.

The “Insulation” command has been enhanced by the construction method “Polyline”, which allows the laying of an insulation along a polyline, similar to the ATHENA function “wall”. During the process, it is also possible to select existing polyline insulations, lines, polylines or arcs, on which the insulation should take place. With this method, the laid insulation can also be divided and connected.

A metal sheet created using the “Profiled sheet” command, which consists of several partial sheets, is no longer a combined object. Instead, each partial sheet is a separate object in its delivery size . The entire sheet can be extended and shortened using the grips, and as many partial sheets can be added or removed as fit into the new resulting segment.

In addition, the following profiled sheets were added:

The new command “3D model projection” allows the creation of a two-dimensional view of the current model view of an ATHENA 3D model using a projection. All or only the selected objects of the 3D model can be projected.

As an option for the 2D standard view, the projection can also be generated as an exploded view. In addition, an automatic labelling based on position or identifiers is available for the 2D view. 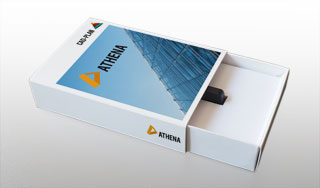