In the light of a clearly brightening mood in the building trade the show management of BAU 2011 in Munich were able to report a visitor record for the third time in succession. Between 17th to 22nd January approximately 238,000 people visited the exhibition booths of the 2,058 exhibitors at the world’s leading show for architecture, materials and systems. Compared to BAU 2009 there was increase of 12% in the number of show visitors and astoundingly the proportion of international visitors in the total visitor count went up from 18% to 25%.

Along with its main booth partner Orgadata and the other exhibitors, KKP, OPS and TA-Projekt, CAD-PLAN also exhibited at the show.

Like the show management, the Managing Director of CAD-PLAN GmbH, Norbert Payer, thought that the show had gone very well: “For us, our participation in this year’s BAU has been the best yet! I was particularly delighted at the remarkably large number of visitors from companies with which we so far had had no personal contact.”

The presentation stations on the show booth were occupied almost non-stop by trade visitors and the CAD-PLAN presenters had hardly a break from demonstrating ATHENA, Flixo and SJ MEPLA. CAD-PLAN took into account the clear trend that the BAU is becoming increasingly international in its visitor structure by reinforcing its exhibition team with branch and sales partners from abroad.

Similarly, CAD-PLAN and its partner exhibitors were well contented with the way the now traditional show party went on Wednesday which is very popular also with other exhibitors seeking an informal chat about the trade. So once again the who-is-who of the facade and curtain-wall sector were greeted with fine wines and delicious nibbles. This time the musical accompaniment to the event took on a Rock air with the band “The cubes – Men at work” led by Mr. Häpp who is more familiar to visitors in connection with HAGA Metallbau GmbH.

After an extremely positive assessment of CAD-PLAN’s participation at BAU 2011, the question arises: Will BAU 2013 present a new record? CAD-PLAN will be able to answer that in two years time. After all, exhibiting at the BAU has for years been a must for CAD-PLAN. 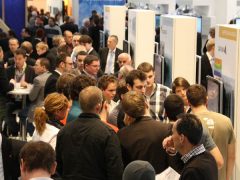 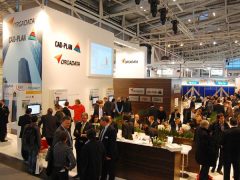 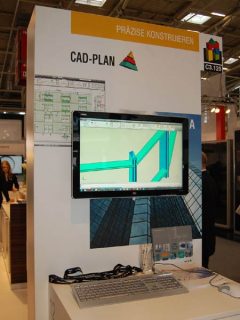 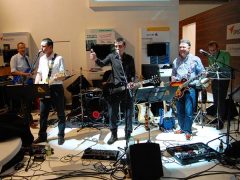